Adam Gerard has been mildly obsessed with scrapple ever since he was introduced to it at the age of 15. (3)

Close your eyes and imagine the most amazing sandwich your mind can create. It involves scrapple right? Of course it does, but what else? Before you answer, let me try this out on you: Take some thick-cut, crispy  Habbersett scrapple and put it on top of dry-rubbed  smoked sirloin. For toppings add some sharp American cheese and a sweet, homemade  barbecue sauce. Cram all that between a fresh baked  South Philly roll that is drizzled with  pure maple syrup. Was that what you envisioned? Is your mouth watering?
END_OF_DOCUMENT_TOKEN_TO_BE_REPLACED 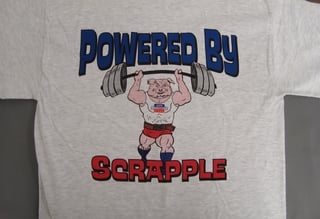 RAPA, located in Bridgeville, Delaware, is the world's largest producer of scrapple. Wow, that is a great phrase to read.

Scrapple lovers often have a brand-of-choice, so RAPA's distinctive red, white and blue packaging is a welcome sight to many. Growing up in Maryland, this was once the only scrapple I knew.

In 1926, brothers Ralph and Paul Adams started a scrapple manufacturing plant. Notice the bold letters I added? That's where the RAPA name comes from. Did I just blow your mind? Probably not, but still, it's an interesting fact.

Though RAPA was bought by Jones Dairy Farm in 1981, their scrapple continues to be manufactured in Bridgeville with a staff of 60, in a facility that looks like a giant brick of their own scrapple. No word on if they are looking to hire scrapple quality control tasters, though I'm sure they'd have little trouble filling that position.

END_OF_DOCUMENT_TOKEN_TO_BE_REPLACED

3 New Ways Scrapple Can Be Part of Your Christmas Festivities

"Any day with scrapple is like Christmas!" says Gregg S. on our Scrapple Facebook page. Well, I guess that's true, but technically only one day a year is actually Christmas.

On that wonderful day, how do you incorporate scrapple into your Christmas festivities? Maybe a side dish along with some sort of casserole. Or maybe scrapple and eggs as you unwrap gifts. Man, that sounds delicious. But I'm wondering if we can do even more.

Here are a few ideas to make scrapple a bigger part of everyone's Christmas:

Mom, Dad, Little Susie, Fido - sure the whole family gets a stocking over the fireplace. But what does that say about your choice in breakfast meat? Absolutely nothing. Which is why we should all be hanging scrapple Christmas stockings by the chimney with care.

Bonus: I bet a brick of scrapple would slide right in to that stocking. Shopping just got easier!

END_OF_DOCUMENT_TOKEN_TO_BE_REPLACED Anyway, I wondered, have any of our Presidents been scrapple lovers?

I'm sure, of the 44 that have lived in the White House, several of them have enjoyed a slice or two of scrapple. But it looks like the only US President with any real evidence of eating scrapple in the White House is our 15th, President James Buchanan.

While compiling this list I attempted as often as possible to learn not what the presidents ate at state functions and inaugural dinners but during their solitary breakfasts and family suppers—in other words, their comfort foods.

This makes sense since he is also our only President from Pennsylvania, a state that knows a thing or two about scrapple. From PA to DC, Buchanan proudly brought one of his boyhood comfort foods along.

END_OF_DOCUMENT_TOKEN_TO_BE_REPLACED

The Intertwined History of Scrapple and Labor Day According to the Department of Labor, the actual founder of labor day is a bit unclear:

Some records show that Peter J. McGuire, general secretary of the Brotherhood of Carpenters and Joiners and a cofounder of the American Federation of Labor, was first in suggesting a day to honor those "who from rude nature have delved and carved all the grandeur we behold." But Peter McGuire's place in Labor Day history has not gone unchallenged. Many believe that Matthew Maguire, a machinist, founded the holiday.

What isn't mentioned here are recent findings by the Research Association of Pork Amalgamations supporting evidence of a different origin of Labor Day. Have you heard the name Rasher Liverburg? Probably not, but if you love scrapple and having off the first Monday every September, then you should read on.

END_OF_DOCUMENT_TOKEN_TO_BE_REPLACED

Oh, You Think Scrapple is Disgusting? Condescending Willy Wonka does not care for your scrapple disgust:

I mean, he has a point. What do you think?

END_OF_DOCUMENT_TOKEN_TO_BE_REPLACED

3 Tips for When You Introduce Someone to Scrapple You love scrapple. If you could, you would eat it every day (maybe you do). But part of your job as a scrapple eater is to spread the love.

So what's the best technique for introducing scrapple newbies to this delicious, but often misunderstood meat? Here are a few suggestions.


1. Play It Cool
Don't make a big deal about how awesome scrapple is. It will only lead to questions, and in this case, questions are our enemy. The less newbies know before eating scrapple, the better.

Just offer to make breakfast. Nothing special, no big deal.

END_OF_DOCUMENT_TOKEN_TO_BE_REPLACED END_OF_DOCUMENT_TOKEN_TO_BE_REPLACED

Of course The Most Interesting Man in the World eats his scrapple the correct way: Scrapple on, my friends.

END_OF_DOCUMENT_TOKEN_TO_BE_REPLACED